As we recover from the whirlwind and chaos that is Pesach (Baruch Hashem!), we pause for a moment to reflect on the Yom Tov that passed. Pesach at TheZone was memorable, yet indescribable. With hundreds of Oorah families and campers passing through over Yom Tov, it is hard to capture the flavor and the spirit of the holiday. But, with the help of several participants, we will try.

With 350(!!!!) guests sitting around our Seder table, led by Rabbi Chaim Mintz, we still were able to have one unified Seder. Many participants remarked on the beauty of having so many different “types” of Jews all celebrating together in complete unity. Ma nishtana was recited in at least a dozen languages, including Hungarian, Farsi, Russian and even sign language!

Kosher for Pesach muffins that tasted like the real deal, baked in house!

Dueling Rabbis got all the parents and teachers in attendance heatedly debating the merits of homework. Oorah’s signature Yaalili contest had both Sephardim and Ashkenazim entertained. And throughout the Yom Tov, thought-provoking discussions, conversations and learning sessions abounded. And could we forget to mention the non-gebrokts muffins?!

In the words of one guest, “I never experienced such a thing! It was Gan Eden! Such love! Such achdut! Nowhere is there anything like what I saw!”

The inspiration of Pesach at TheZone resonated with so many who told us of the changes they have made in their own lives because of the experience. We close with the remarkable testimony of a touched mother:

“Spending the first days of Pesach at TheZone with the wonderful Oorah family was a life-changing experience.

I got a chance to witness and be part of a REAL, MEANINGFUL Jewish experience. One where I was not judged based on my appearance, but instead cherished- for being me!

It was the first time in 30 years that I felt accepted in a religious environment. It has made me realize that there are G-dly people in the world and that I can join them in serving Hashem in a way that makes sense to me.

This experience was made even more special by the fact that it has given me (a single mother) the desire to raise my son in a Jewish environment. Before this Pesach, I did not ever consider sending my son to a Jewish school. Now, I hope he will start his Jewish education in Oorah’s preschool in Staten Island!

Last night, the first night of Chanukah, was Oorah’s sixth annual Chanukah concert. The overwhelming response from concert attendees is that it was AWESOME, perhaps the best ever!

Over 2,000 members of Oorah’s programs poured into Brooklyn College’s Walt Whitman Theatre for a night of celebration that started Chanukah off with a bang.

The concert was free for the entire Oorah family, from TorahMates to Zoniacs to Chillers to Little Star preschool families and Torah Spot regulars. 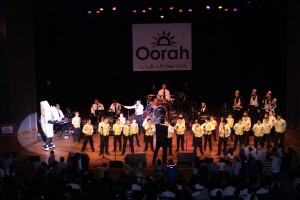 All the talent onstage: Avraham Fried, NYBC, Zemiros Choir, and, of course, Fiveish.

Some highlights that made the night spectacular:

Performers Avraham Fried, Yitzy Bald and the NYBC, the Zemiros Choir and the Shloime Dachs orchestra kept the audience on their toes, enjoying every minute of the performance. Avraham Fried introduced our very own Little Star preschoolers singing “Twinkle, twinkle kochavim…” The children were simply adorable with their professional act.

Rabbi Chaim Mintz always brings the house down with his inspirational delivery and last night was no exception. Everyone’s hands were raised for his trivia questions, vying for the chance to win a huge Zone-sweatshirted panda bear. And when he led the crowd in Shema, the theater resounded with the fervor. 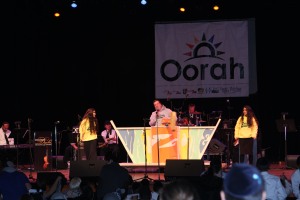 Two Zoniacs compete in a round of MadZone, moderated by the one and only Rabbi Krawiec.

Our very own Zoniacs were stars of the evening too, dancing on stage, playing our signature MadZone game show and singing along while Fiveish (this was his first time attending!) showed off his moves.

What a night for the Oorah family!

Happy Chanukah to all!

Yesterday was an exciting day at Oorah’s Little Star Preschool in Staten Island. It was graduation day! The three-, four- and five-year-old boys and girls put on adorable performances for their proud parents, grandparents, siblings, friends and teachers. 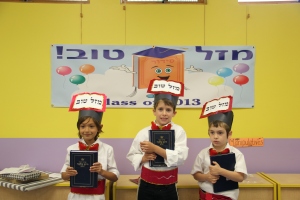 The five year old class with their new siddurim

It was a proud day for all.